If you're voting Tony George simply because you want to restore Law & Order, Wake Up Wilkes Barre. This guy is already selling our city down the river. Accepting HUGE campaign contributions from city contractors, and criminals in exchange for No-Bid city contracts or political favors?
According to the Citizens Voice newspaper, Greco plead guilty to providing illegal payments to an elected official. (identified as former Luzerne County Commissioner Greg Skrepenak)

So, Greco gets in trouble for buying an elected official, and is now attempting to buy YOUR next mayor!
Hold the phone Wilkes-Barre, isn't this the same guy who told us during the primary that “Voters who want a fourth term of the Leighton Administration should vote for Councilman George Brown."?
As Tony is running around telling voters that he will end the "status quo", he sure isn't acting like it.

Bill Fleming of Wilkes-Barre filed criminal charges against Tony George providing that 5 LARGE campaign signs (seen below) were been deployed by the George campaign ALL without the mandatory legal disclaimer "paid for by", as required by state law. Likely because the signs were actually paid for by Thom Greco, YES the same Thom Greco who has already plead guilty to bribing a public official(s).


Tony responded with “It’s not an issue. It would be if they were all like that,"
George said he has more than 800 signs throughout the city and initially all of them were legal. The signs Fleming found did not have the proper information, but it was added later, George said.
If you vote for this guy thinking Law & Order will be restored, you need to remember Tony is a Phony, who is just another type of Crony! Now it's easy to see why Tony supported gangster Judge Mark Ciavarella and Kids for Cash scandal because he cleaned up that school, while taking BRIBES!Clik here to read "Tony George defends Kids for Cash Judge"
Wake Up Wilkes Barre

Posted by Wake up wilkes barrr at 6:12 PM No comments: 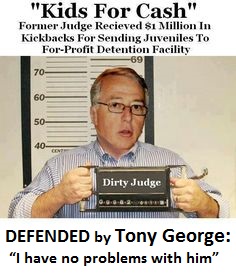 Many folks have been asking what did Tony George say, some even defending his actions, but for the sake of argument, lets take a closer look, shall we?
"I did support Mark, Judge Ciavarella for what he did for Wilkes-Barre Area Career and Technical Center. When kids came to him, he said if you violate what he says, you’ll, you’ll, you’ll be, in front of me, and that’s exactly what he did. I have no problems with him, with the school because he cleaned up that school, and made it a safe environment for the other students in that school."


Lets reflect:
Problems:
As we've seen following Kids for Cash, those children who likely just needed guidance, i.e. positive role models, or a little discipline, got painted with a crooked brush of justice, as those who may have truly deserved to be locked up. Let me ask you, think back to when you were in school,
Not only did the actions of Mark Ciavarella negatively impact the families/children of Kids for Cash, the financial impact to the taxpayers of Luzerne County via massive lawsuits/settlements, forever tainting Luzerne County nationally/internationally, but what did this scandal do with regards to those "Bad Kids" (as those who are quick to defend Tony George/Mark Ciavarella like to refer to them)?

You know the ones who may have been in court so many times that the judges --- well real judges, may have spoken with so often that they not only know their names, but could likely tell you their eye color without even seeing them. What about the fact that those (again "Bad Kids") now got a FREE PASS, all do to the fact that this greedy/crooked/corrupt judge did the unimaginable to so many, for some of the smallest of infractions?


Now comes a former police chief /current school resource officer/aspiring mayoral candidate Tony George, who STILL TO THIS DAY "has no problem" with what a crooked/sleazy/slimy/greedy judge did, and WHY?, because the actions of that slimy judge seemed to cleaned up that school...
Wake Up Wilkes Barre 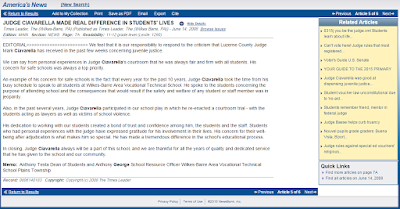 Posted by Wake up wilkes barrr at 4:13 PM No comments: