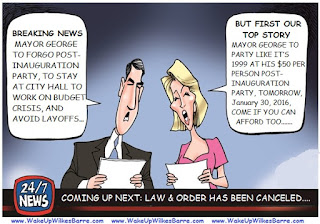 George opted to forgo the post-inauguration party, to stay in city hall where city employees said George had spent the day either in his office or bustling from department to department familiarizing himself with the day-to-day operations. “Simply put, now is not the time for a party in Wilkes-Barre,” he said at the close of the ceremony. “Instead, it’s time for us to recognize the challenges Wilkes-Barre faces and to immediately get to work.”

YET now tomorrow anyone with an EXTRA FIFTY BUCKS can party like it's 1999 with Mayor George, and his corrupt cronies, at the Genetti Hotel & Conference Center, where I’m sure one of Tony’s largets campaign donors, criminal Thom Greco will be catering the event.

One has to wonder what changed in the past 24 days. I mean on the 5th we were in crisis mode and the mayor needed to stay at city hall and work, but now?

GAS GATE UPDATE: Anyone notice Mayor George filling up at the city pumps in a CITY CAR? After criticizing Mayor Leighton on Gas Gate, What nerve..... 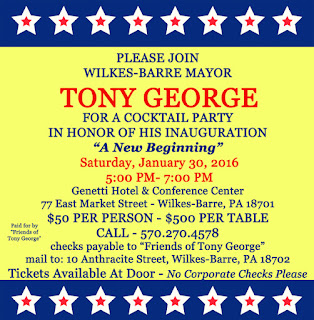 Posted by Wake up wilkes barrr at 2:32 PM No comments: