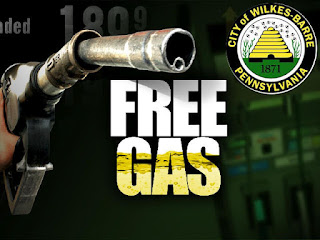 Many citizens and city employees have been telling us for quite some time now that they personally have seen both our King, and the DPW Manger Ken Pahler fueling not only their personal vehicles, but those of their family members.

One employees who MUST remain nameless for fear of retaliation has stated “Pahler has a tank in the bed of his truck, and he fills it up, weekly”

So with that we requested the video surveillance cameras at DPW to see for ourselves, and to our great surprise the city responded with a laundry list of reasons we can’t see the tapes. 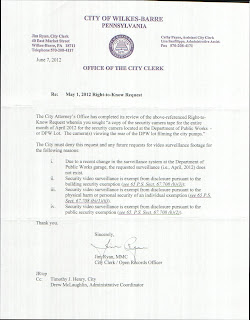 They must be Hawkeye!!!

Now I wonder, why play that card, if you have nothing to hide?

McCormick and Mc-Laugh-lin said they’re confident the discrepancies are a matter of poor record keeping, and not an indication of theft or unauthorized use of fuel.

“I have to talk to our people at DPW, but I don’t have any reason to believe any of our employees are doing anything illegally,” McCormick said. “I’m assuming they are just not diligent in signing the log … That’s a problem.”

McCormick and Mc-Laugh-lin said they suspect the issue may lie primarily with employees who access the pumps after the DPW garage closes at 3:30 p.m.
“They probably are not diligent enough in signing the logs after hours as they are during the day,” Mc-Laugh-lin said.

Mc-Laugh-lin said he’s confident there’s no theft going on because the majority of city employees use the pumps during the day, when DPW is fully staffed. If an unauthorized person were to fill up, employees there would see it.
“It’s very hard for the theft or abuse of the fueling system to go undetected given all the eyes and ears that monitor the facility,” he said.

“I can’t explain it. Obviously, going forward, we have to change that system to somehow do better monitoring and make sure everything jives,” McCormick said.

Leighton said he feels he’s entitled to use city gasoline because he’s on the job virtually 24-7, traveling to meetings and checking out various problems and issues throughout the city at all hours of the day.

Other Cities Chime in!

Luzerne County and Hazleton keep track of fuel usage through electronic fuel control systems that track the amount pumped into each vehicle.

Joe Gibbons, an engineer with the county’s Road and Bridge Department, said each county vehicle has a key card assigned to it. The vehicle operator must insert the key into the pump and enter the mileage of the vehicle before it will operate.

Source:
Posted by Wake up wilkes barrr at 10:59 AM